The Evolution of a Back Yard Pool 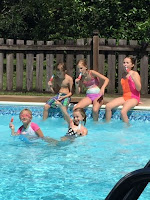 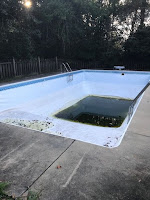 When our children were younger we were fortunate enough to live next door to wonderful people who loved them. They had a swimming pool and our kids had standing invitations to swim. Our children became very strong swimmers and we all enjoyed their pool. I am sure that I appreciated that wonderful circumstance. I am also sure that I did not appreciate it enough. You see, all the cleaning and maintaining of that pool went unnoticed by our whole family. By the time we engaged with it all we saw was a sparkling blue watery playground. 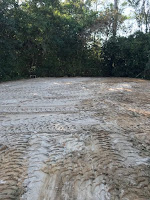 Switch forward a few years and we moved from that home and those neighbors. It was 1993 and we needed a larger home because we were all getting larger. So we moved into a very nice home in a nice neighborhood on a golf course with a swimming pool. Life raced along and career, school, church, sports and a busy life consumed us all.

Along the way that swimming pool became my nemesis. I seemed to need to constantly clean the miserable thing. I spent hours upon hours brushing it down, removing leaves, vacuuming, shocking it, pouring $1,000’s in chemicals into it and it would still be green and murky looking. Changing pumps, filters and of course liners helped. I seemed to get more proficient in the process and on occasion it would look sparkling, cool and inviting.

I admit getting into it and floating around on an inflated apparatus was a very nice source of relaxation. We all sported some pretty impressive tans in the summer. That is, when the weather permitted. I recall many times when my kids were in high school and later, college they would plan to have friends over to get into the pool and voila our semi tropical location here in Florida would produce the afternoon thunderstorm and cancel all plans. During prolonged hot weather periods the water in the pool felt like lukewarm bath water.

Then there is the capital investment side of it. After I became a real estate broker, later in life, I learned that a pool is a neutral asset. There are as many people who would hate a pool as there are who would love a pool when it came time to market your property. On top of that is the liability associated with owning a pool. I have a fence around my property. However I added a $2,000 kiddy fence put there by an acquaintance in the fence business who gave me a “deal” on it.

Along the way a beloved pet, Maggie, drowned in it. I still have nightmares about pulling her out of it. That was almost 10 years ago in 2010. Also there is the financial shock of having to replace liners at $5,000 a clip.

The liners seem to have a life span of 10 years. I replaced one in 1996 at that cost. Of course we were pretty engaged in getting into it at that point in time. Then in 2006 with our three children pretty much moved out, married with children, etc. I decided that the thing I wanted most of all was to fill it in. I had the man with his back hoe on the road practically when my wife sat me down and showed me videos of our last July Fourth holiday. Of course that occurred around our pool. Watching our little grandchildren splashing around in the pool was more than I could resist. I not only replaced the liner but built a much nicer, concrete deck around it and added some other amenities at a cost of $10k plus.

Well, we took a great vacation to the Smokeys back in August. When we got back I noticed that the pool was down about a foot. We were in the midst of one of the worst heat wave droughts in 50 years so I felt perhaps it was just intense evaporation. So I put in the hose and got it back up only to find it down another foot in a couple of days. I did not even bother to look for the leak. Liner is now 13 years old so it is beyond its life span.

It is impossible to find someone to do any kind of work around your house.  So I spent almost 6 weeks and finally got two disparate bids. As I put out the word my wife and daughters were distraught. My grandchildren became militant. However, no one swam in the pool at all this past summer. It was time and it became a done deal.

Now that it is done,  I experience some unexpected pangs of emotion. At the same time I cannot prevent myself  from smiling and occasionally breaking out in glee. Yet, also I find myself with a little sadness and nostalgia. My ownership of this pool now spans more than 25 years. I assess that passage of time. My three children have graduated, married and given me grandchildren. I retired from a 30 year career and started a second career. Filling in the pool sort of becomes a simile for the passage of that time. As the albatross hung around the neck of the ancient mariner in the Coleridge poem the pool has hung around mine. I wonder if the mariner ever got rid of his albatross? I surely have mine and in due time when the summer sun beats down and I am swimming in my daughter’s pool I will never have any regrets for cutting that bird loose.
Posted by Lee Vass at 9:16 AM No comments: