Baseball, Sit Back and Enjoy 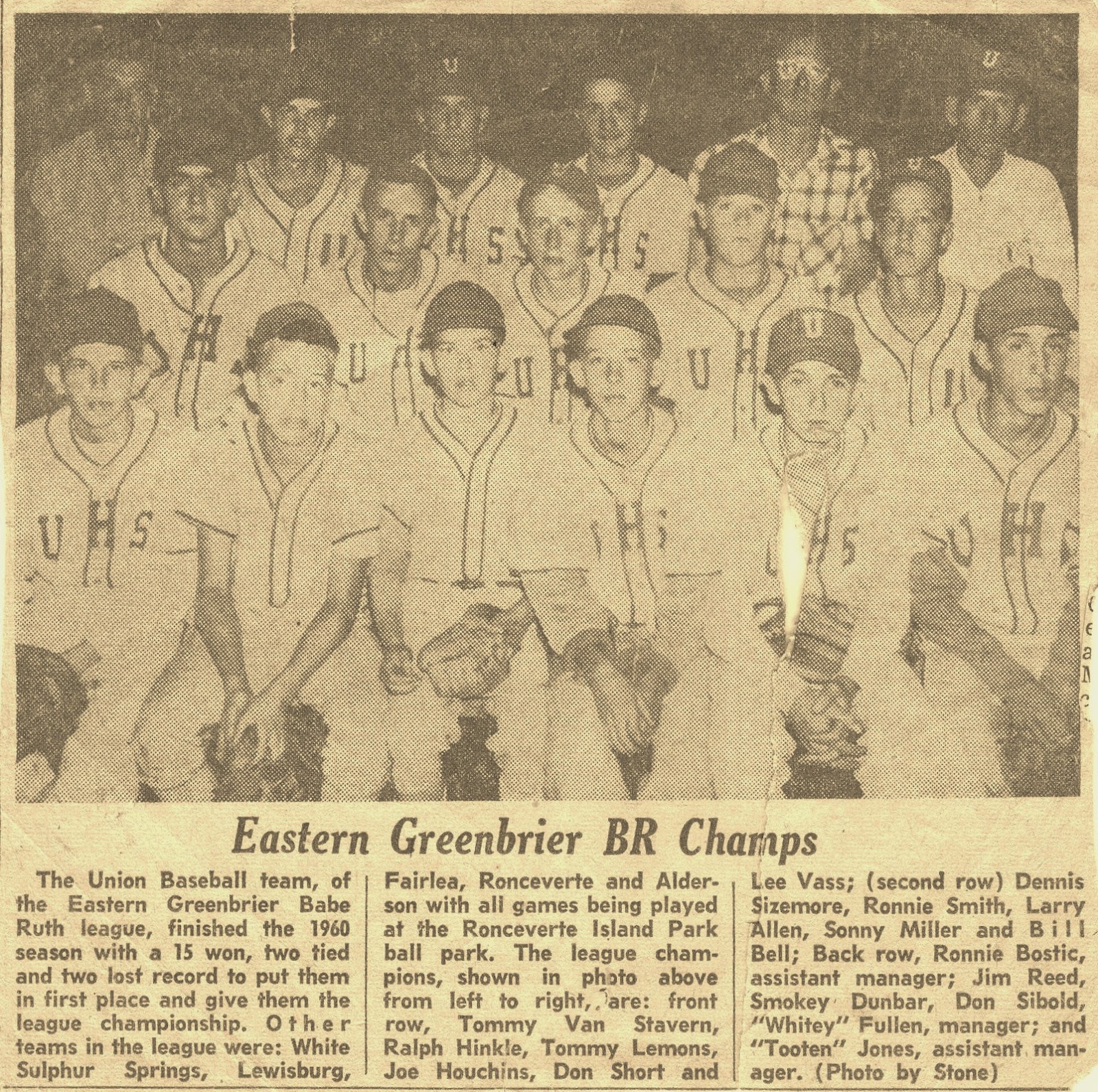 Posting today about baseball. The picture above is of my 1960 Babe Ruth baseball team. We won the championship of the Greebrier County Babe Ruth League. I am the wormy little kid on the bottom right. That was 54 years ago. I went on to make the All Star team that year which was an honor. I don't think we got out of districts. I went on to play in high school and played intramural in college and was out. Since that time I coached in Babe Ruth and Little league. I was the League president of a 13-14 year old league in Tallahassee and took a team to the state tournament.Nowadays my biggest investiture is having MLB network on my sports cable package.

I remember the summer that I played in this league. I can remember a catch I made late in a game on a ball that was hit over my head in center field. I had to run like the wind to catch it. I remember catching it over my shoulder as I dove to make a desparation attempt. That catch preserved a win for our team and contributed to our winning the league championship. I also seem to recall that it made me a member of the All Star team as the coach hand picked me to be one of his "at large" picks. I have vivid memories of the smells around that field, the way my baseball glove fit and how hard it was to hit a good pitcher.

Baseball has always been intriguing to me. It is a painfully slow game to watch. It is slow to play it. You can go an entire game and never get on base and never have a chance to make a play in the field. Yet it appeals to millions of people. It has been called our national past time. Many people forego watching it by saying it is just way too slow for my taste.

My favorite movie is "Field of Dreams" produced and released in 1989, starring Kevin Costner. There is something ethereal about that movie. If you have not seen it, it is about a gaggle of ghost baseball players who live in a corn field in Iowa. The theme is concerning dreams that have not ever come true, where and what exactly is heaven and time travel. The movie speaks to the zen of baseball. The great James Earl Jones gives a sililoqouy in the midst of the movie that captures the spirit of baseball about as well as it can be captured. If you have not watched that movie you should You Tube the piece by Jones.

I am at peace when I watch a baseball game on television. I tend to be a Braves fan foremost and a Rays fan secondarily. However, it does not really matter what teams are playing, I am going to watch, eat a bowl of ice cream or a bag of popcorn. I am fortunate to live in Tallahassee which has Florida State University baseball which is as good as any in the country. When I am sitting in a stadium, my menu changes to hot dogs, nachoes or roasted peanuts.

My family is always assaulting me with questions about what to get me for my birthday, May 27th and then for Fathers Day, 2-3 weeks later. I recently advised them that I want fitted baseball hats, size 7 & 1/2, for each major league team. That will be a collection of 30 hats which I will like having. That should get them off of me for the next 15 years.

Walt Alston who managed the Dodgers many years ago was asked to explain the appeal of baseball to Americans. He is quoted as saying, " Baseball is like church. Many attend but few truly understand." I think that is a dead on accurate description. Speaking as one who attends church and has read and studied to try and foster an understanding of religion,  baseball is similar. There is strategy in what is going on between the batter and the pitcher, between the base runner and the hitter, the pitcher and the catcher, the base coaches and the runners, the in-fielders and the out-fielders. You can't explain it, you have to just feel and experience it.