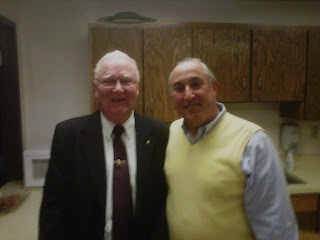 This past week I had the opportunity to listen to a presentation by former astronaut, Don Lind. As a young man back in Montgomery Alabama in 1964'ish I used to hang out with a lot of Air Firce brats. I was aware of and became a fan of Don Lind. He was a PhD in Physics and was also a navy pilot, before he became an astronaut. His son Dave lives here in Tallahassee and is a PhD and also teaches Physics at Florida State University.

I have kept up with Dr. Lind over the better part of 40 years and have always held him in the utmost of esteem. He flew on one of the sky labs and was lifted into space on the Challenger. I never knew this particular fact. He and his crew were the last crew to successfully fly Challenger into space. The next crew that went up on it were subjected to a fiery explosion that ended all of their lives. I believe that was January 28, 1986.

After the Challenger disaster Dr. Lind told our recent gathering that he was called into a NASA office in Houston and was told the following. You may recall that the reason that the Challenger exploded was because of a defective O-ring sealing the rocket booster from the separation configuration between it and the payload. This same defect existed on Dr. Lind's flight. The same malfunction occurred but through some miraculous coincidence a fragment of the O-ring plugged the rupture just long enough to prevent the fuel from rushing sideways thusly stopping the explosion on their flight. He told us that he was advised by this project supervisor that he and his colleagues had come within .3 seconds of the same fate as the crew of 1/28/86.

He testified as to how chilling of a realization that was. That he came that close to dying caused him a great deal of reflection. The thought that he could have ended up a charred cinder in less than one second had serendipity not have saved him was sobering.

Now he had landed almost 100 flights on the deck of a carrier during his flying days. He had led a life that involved a great deal of risk taking.

I can isolate several near misses in my life. Experiences behind the wheel of a car, behind the handle bars of a motorcycle, being a few inches to the left of a 30-06 round out in the woods during deer hunting season. I am sure that there have been numerous close calls that I was not even aware of.

We humans are most likely amongst the most fragile of all life forms here on planet earth. We are a delicate balance of carbon atoms suspended in just the right chemical status to keep us getting up in the morning. If the homeostatic balance is marginalized in any fashion we are toast.

I remember many years ago a railroad accident in Youngstown, Florida. That is near Panama City. A couple of young men thought it would be fun to interfere with the integrity of a railroad track. Their vandalism caused a freight train to derail. One of the cars was filled with chlorine. When the car was ruptured a fog of chlorine gas ensued. It was fairly early in the morning. As cars proceeding south on US 231 approached the area they noticed what they thought was a little fog hanging over the road. As they drove through the mist they unfortunately found themselves breathing poisonous chlorine gas. The outcome was 14 fatalities. They were simply in the wrong place at the wrong time.

I remember reading a short story by Mark Twain called " The Mysterious Stranger". It had as its main point how precarious life is. It was somewhat of a commentary on how silly, Twain's opinion, that the theory of predestination was.

I suppose we should live each moment as if it were to be our last one. We would all be a lot better off, I would imagine.
Posted by Lee Vass at 6:58 PM No comments: