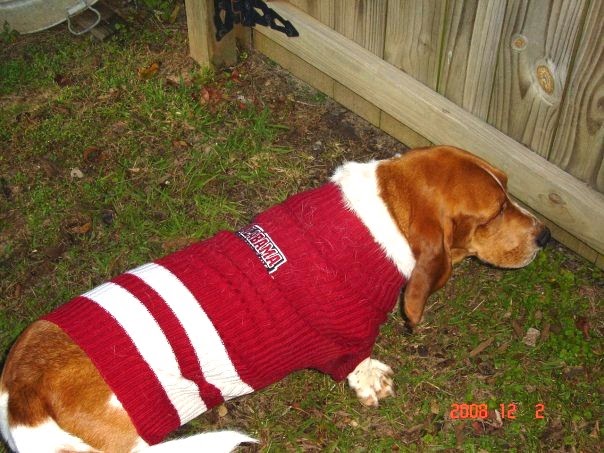 
I have heard about Dog Days my entire life. I recently tried to explain the sketchy information I held about Dog Days to my son and realized that I actually knew very little about it. A quick visit to Wickipedia and I was a walking encyclopedia about the subject.

It seems that Dog Days are an ancient Roman reference. It incorporates 40 days commencing July 16th and concluding around August 25th. It is usually the hottest part of the year and I cannot argue with that fact based on the 100 degree days we have had here in Tallahassee. The stretch is tied to the rise of
the star Sirius, also known as the dog star. The ancient Romans believed that dragons were more active during this time, the sea turned to wine and that dogs acted much more erratic. It always seemed to me that Maggie was more lazy during this time of the year. Not that she was ever a bundle of energy.

I remember as a child hearing my grand mother and her cronies talk about Dog Days. She had an entire list of things you did and didn't do during Dog days. They were tied to the Farmer's Almanac which is another mystical  thing I never fully understood. Planting season, rainfall, arthritis spells, mood swings and all sorts of things are linked somehow to Dog days.

My father in law who was one of my best ever friends told me that you will never hear a mocking bird sing during Dog days. I was sitting in the back yard yesterday after having cleaned the pool and I heard the song of a mocking bird. I thought about him and I realized that according to the almanac that Dog days were now officially over. I have noted that the mocking birds that used to wake me up at 3:00 in the morning have been absent, heretofore.

I noticed this morning as I looked through Facebook to see who was getting married, dumping ice water on their heads, sending their little darlings back to school and getting committed to insane asylums that today was Love Your Dog Day. There were all sorts of pictures posted up of people's lovable little mutts and descriptions of the zany things they do and say.

I will say this about Dog days: They are extremely boring ! At least in my corner of the world. I can see that Dog days is a spectacular time to go on vacation and mix it up a little bit. I went to the beach a couple of times and that was about it. It is way too hot to play golf. I have October slated as my re-start date on golfing.

Anything that involves not being under a ceiling fan sounds like a terrible expenditure of time to me. Ah, but there is hope immediately ahead. Football season starts in all the land 8/30. Suddenly there is purpose in lying in my recliner under the ceiling fan with Dish network tuned to the myriad of games going on across the nation.

I have to go watch the Paul Finebaum show on my new SEC network. Man, am I glad that Dog days are now officially ended.